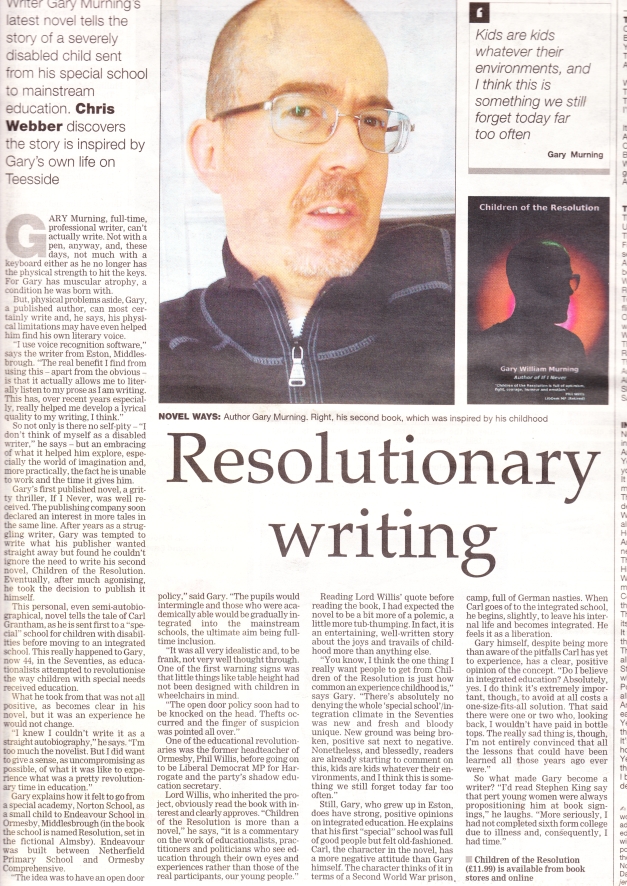 I haven’t written a great deal about my latest project, The Legacy of Lorna Lovelost, here (though I have tweeted about it considerably). This is, of course, the result of my generally blogging less these days rather than any conscious decision to deny my blog-readers, and, rather ironically, I’m now mentioning it only in passing as I look forward and look back—contemplating my next project and the recently published Children of the Resolution.

As is so often the way, common threads tend to run through some of the projects I write. Lorna Lovelost, for example, has certain connections to my first published novel, If I Never. Similarly, it’s beginning to look as though my next project—tentatively titled The Wisdom of Closed Worlds, is going to have thematic links with Children of the Resolution. (More of this at a later date.) Consequently, today has found me revisiting some of my blog posts from the period during which I was working on Children. And it occurred to me that said posts might be of interest to old and new readers alike.

So, a brief selection of those I still find interesting:

Good to Be Writing Again—my first post upon starting work on the novel itself.
On Writing Child Characters for Adults—addressing some of my concerns; a half decent insight into how I work.
Death Off-Stage—how the most difficult scenes can often be far easier to write than we expect.
The Final Curtain—on leaving behind “old friends”.
The Difficult Questions—looking at how I deal with “bullying” in Children of the Resolution.
Burning Love—a brief, light post on one of Carl Grantham’s childhood heroes (and my own).

My latest interview with the fantastic people at Newcastle libraries has just gone live. Snippet follows below—but don’t forget to click through; there’s still much, much more to read over there.

What inspired you to write ‘Children of the Resolution?

Children of the Resolution is an unusual novel, for me. Normally, my work is quite removed from my own, personal “story”. The novelist William Boyd once posited the idea that there are, essentially, two kinds of novelists – those who draw heavily from their own experiences, and those who write novels about things they, before researching, know little about. I’d always considered myself to be the latter, even though I do, naturally, use my own emotional experiences etc to breathe life into the characters and stories.

But there had been one particular story – heavily autobiographical – that I’d been trying to write for a number of years that contradicted this. That story, after three attempts, was to become ‘Children of the Resolution’.

The main inspiration was, simply, that there was a story here – more an anthology of experiences, I guess – that needed to be told. In the 1970s, as a child, I’d been among the first disabled children to be integrated into mainstream education in the north-east of England. It had been an exciting time. It had had that revolutionary feel about it. Even as a child, I got a real sense of that. Something new was being tried and, everyone seemed to think, it could only ever end well. Naturally, the initial enthusiasm – somewhat naïve, in many respects – of those implementing the new ideas was, to say the least, challenged.

For a while, I looked around for a written experience of the implementation of integrated education and I wasn’t really surprised to find that there were none. I felt it was a rich and important period. There were many lessons to be learned from those of us who had gone through the system (lessons, sadly, that simply haven’t been learned, in many areas) and, without wishing to sound too grand about it, I felt obliged to write it. Apart from the issues – which, I hasten to add, are not the driving force behind the novel – I very much wanted to give a sense of what it was like, the friends I made, the lessons I learned about life in general. It’s very much a coming-of-age story – rather sad in places but also, I’ve been told, laugh out loud funny.

Today I was featured in the Middlesbrough Evening Gazette. The full article can be read by following the link below.

Gary, 44, said: “My first concern was to entertain, to write a semi-autobiographical novel that wasn’t overly-political and didn’t proselytise. But, more than anything, I think it was about ensuring some of those experiences were on the record. I felt obliged to write it because, to my knowledge, no one else has addressed it in this way.”

(Please note: the paper version of this article has a caption referring to my childhood in Guisborough. Whilst I was indeed born in Guisborough, I did not actually grow up there—and the novel itself does not reference Guisborough in any meaningful way.)

To read your free sample of Children of the Resolution, please click here.

I’m currently getting everything in place for launch week. By way of a test, could you please listened to the file in the player below and let me know if you can hear everything okay?

A sample chapter of If I Never can be read here.

To pre-order your copy of If I Never, please click here.

If I Never News Update.

Quite a busy day, here — a two blog posts kind of day!

So, further to my earlier post, a couple more updates.

If I Never has now been selected in the latest cycle for the Exclusively Independent scheme. For those who are unfamiliar with this, this is a scheme that ensures that books selected by a panel of independent publishers are featured in a prominent display in independent bookshops around the country. This initiative, set up in conjunction with The Arts Council, is something I’ve been following since its inception — never dreaming that If I Never would be featured. Naturally, I consider this to be a huge compliment and extremely exciting!

Also, today, I was featured in my local newspaper. A really good article that manages to give a pretty good idea of who I am and what I do. Cheers, Dave!

A sample chapter of If I Never can be read here.

To pre-order your copy of If I Never, please click here.

Our Garden This Morning…