One of the things I like most about being a writer is the opportunity it presents to meet different people with differing views. I’ve always enjoyed the challenge of intelligent opposition, of people who seek to change your thoughts on a given subject and, in the process, often quite inadvertently strengthen your resolve!

Something like this happened to me a few months ago on Twitter. As many of you know, this has become my primary method of keeping everyone up to speed with what I’m doing. I like its immediacy and the ease with which you can jump into often surprisingly profound discussions.

So there I was, coming towards the end for As Morning Shows the Day, my thousand words finished for the day, and I happened to spot what I thought was an intriguing conversation going on between a couple of writers I knew. The subject — given the rather gritty nature of my first novel, If I Never — interested me and, so, I politely offered my thoughts. 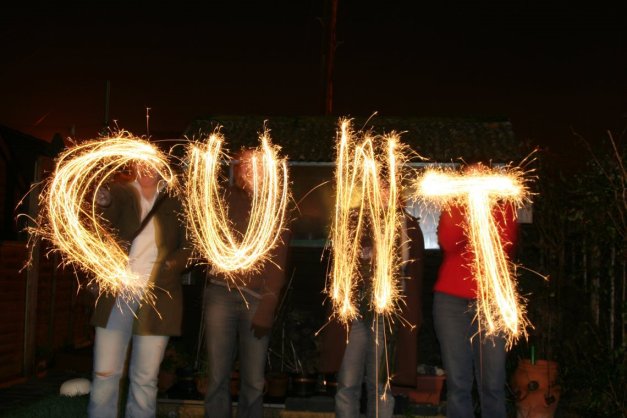 What was being discussed? Rules of grammar? The merit of socialist themes in fiction? Whether or not one should dangle one’s participles? No, the subject under discussion was the word “cunt”. (I’m not going to head down that patronising path and star-out the “u” and “n”. We all know what the word is, however much we may or may not like it.)

The discussion — as I saw it, coming in, admittedly, halfway through — seemed to centre around whether or not the word had “value”. The conclusion seemed to be that it didn’t and, more to the point, that anyone who used the word quite clearly wasn’t “intelligent”.

Now, coming from a fellow novelist, I found this to be quite possibly one of the most ridiculous comments I’ve ever read. I sat before my computer shaking my head and muttering to myself but, nevertheless, responded with my customary charm 😉 — pointing out that I didn’t believe that the use of the word necessarily implied a lack of intelligence and that I could definitely see it, under certain conditions, having value. I was polite. I was friendly. I was genuinely interested in what these people had to say in reply.

But apparently some people cannot enter into a discussion. The response (which I didn’t actually see until I went looking for it) was that anyone who thought that this word (“cunt”, just in case anyone’s forgotten) had value wasn’t someone that this person wanted to follow — and, shock horror, she even went so far as to block me, presenting it to her followers as if I had somehow uttered the forbidden word. Naturally, though blocked, I had to address this and used my other account (always handy!) to let her know that I thought it was rather a shame that she didn’t feel she could discuss the subject maturely and adding that, given the way she had presented it, I believe I deserved a public apology. As her cowardly act might suggest, I didn’t receive a reply, or an apology. And, so, I filed it away and got on with my writing, actually rather grateful that such a simple four letter word could so efficiently sift out the idiots for me. (Value, see?)

Of course, there’s no denying that this particular word has certain connotations that will inevitably offend. No one’s denying that. Yes it’s a word I’m quite happy to use in my fiction where necessary (though rarely excessively), and I have been known to use it in my everyday life (I’m not going to pretend; I have an extensive vocabulary but sometimes, especially around technology, “cunt” is the only word that will do) — but I’m careful with it, as I am with all words that may offend. What I won’t do, however, is change my behaviour to an unreasonable degree just pander to those who have ridiculously refined sensibilities (as they would see it.) Words are of value to me. Even the ones I don’t especially like. Political correctness, the anally retentive — these do not concern me when it comes to my fiction. I write what the characters and plot and theme require. Sometimes that means writing things that I don’t believe in and don’t particularly like. But that doesn’t devalue the words that are used. Words like “cunt” have impact. These are words that do not in any shape or form sit on the fence. They say it hard and they say it true, and as a writer (or, for that matter, a guy trying to make his way in the 21st century) how could I not value that?