A masterpiece of one-upmanship (or should that be one-downmanship?)

My favourite Peter Brookes cartoon of the week, shamelessly “borrowed” from Times Online… 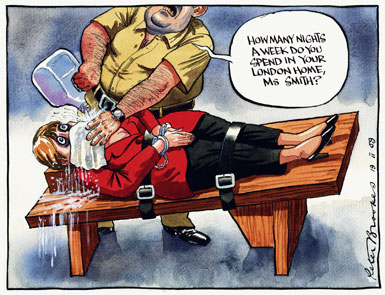 The Last but One Supper.

One of my many, many personal Monty Python favourites — the Pope and Michaelangelo:

It was inevitable, really, wasn’t it? Obama orders Guantánamo to be closed, knife robberies and burglaries are up in the UK, Gaza smugglers get back to work — and the story that everybody seems to be talking about most is Jonathan Ross’s return to television after his three-month ban for making lewd calls with Russell Brand to the actor Andrew Sachs.

And, of course, it’s just as inevitable that I feel I have to say something further on this quite ridiculous state of affairs.

Initially, because of the involvement of Andrew Sachs, I considered this “prank”, or whatever you want to call it, a joke too far. His granddaughter, in my opinion, was fair game, but to involve him in that way… it just left a rather bad taste (as the “dancer” said to the “comedian”). In the intervening months, however, with the BBC continually being pushed to monitor and restrict more rigidly what their presenters say, I find my more usual stance coming to the fore on this matter.

It is time to take a step back, yet again, ladies and gentlemen, and survey this whole episode — and all similar episodes — more rationally, without the knee-jerk response of “that’s offensive!”

What really made me sit up and take notice today was a reference that some guy made on BBC News 24 to an earlier comment Jonathan Ross had made to David Cameron — Ross asking Cameron whether he had fantasised about Margaret Thatcher. This was given as evidence of Jonathan Ross’s recidivistic tendencies. He’s a bad boy now and he’s always been a bad boy. Why? Because he makes jokes about people in positions of power/authority? Because the jokes push the boundaries of good taste? I’m sorry, but this kind of joke is very different to the mistakes he would later make — and the very suggestion that such humour should be somehow eradicated, or even edited, is, frankly, unacceptable and deeply disturbing.

As Kurt Vonnegut said “The best jokes are dangerous, and dangerous because they are in some way truthful.”

Such humour plays a vitally important role in our society. Its purpose is to challenge, to say the things that we feel we cannot say ourselves. To impose restrictions, to pander to the simpering, politically correct idiots who are scared to offend anyone and everyone, is a further imposition — a further dilution of our right to express an opinion, however unorthodox.

Jonathan Ross made an error of judgement. Speaking for myself, I’d much rather live in a world where such mistakes can occur than one where the censorship of the imagined masses removes all possibility of their ever happening.

A Pain in the…

I’m not quite up to proper blogging, yet (getting there, though), but something a friend said on Twitter reminded me (by a slightly circuitous route) of this — and I just had to share.

Across the Gulf of Space…

Ladies, gentlemen and anyone else who might be tuning into this frequency — this evening I bring you grave news.

We know now that in the early years of the 21st Century, this world was being watched closely by intelligences greater than man’s. These beings from we know not where monitored us closely, assessing coldly, calculating facts and figures in manners we ourselves would have found unfathomable. They watched and they waited, patient as geological time, undeniable, rigorous — preparing for the moment when they would set out.

And so they came. With technologies far advanced, they travelled light-years at close to lightspeed, warping and distorting — spacetime the stuff they wished to make it.

In the early hours of last Sunday, they arrived at their destination. Earth, that green and blue planet we call home. Lights in the sky were first seen in the Lincolnshire town of Conisholme. Local ufologists reported that the number of sightings was the second largest in local ufology history. A Mr Palmer reported: “I actually saw a white light – a round, white light that seemed to be hovering.”

When the time came to make themselves known to us, however — that “take me to your leader” moment that so many of us have been expecting and, perhaps, dreading for many a year — we were to be disappointed.

You see, these are not the infallible creatures we imagined them to be. After travelling light-years, distorting spacetime, creating wormholes with the flick of a switch — no doubt whilst munching on a ham and cheese toasted sandwich — a quite possibly tragic accident occurred.

They crashed into a wind turbine and had to bugger off home to make emergency repairs.

… Being a ufologists must be such a difficult occupation. Whatever Mulder and Scully fantasies I might occasionally entertain, I very much doubt I’d be up to the job. The disappointment I could probably bear, but certainly not the carpal tunnel syndrome from all the desperate grasping at straws that the job requires.

Some days you just shouldn’t look at the news. I mean, you shouldn’t even peek at it out of the corner of your eye in a squinty way. Some days the news just seems to be one malicious belly laugh of a story after another.

Makes you wish you’d stayed in bed, doesn’t it?

But, of course, it isn’t all bad news. No, really, it isn’t. Oh, all right, then, have it your way. It is all bad — but some news is less bad. For example, tomorrow should see me hitting 20,000 words with Tomorrow Will Come and Will Be Just Like Today. Granted, that means that I still have somewhere in the region of 140,000 words to go — but only a couple of weeks ago I still had 150,000 words ahead of me. See?

Joking aside, all being well I’ll hit my aforementioned pre-Christmas target of 20,000 words tomorrow. I’ll then be focusing on tidying up what I’ve written so far, sorting my notes ready for the new year and generally concentrating on trying to switch off from it for a while. I’m looking forward to the break, even whilst I’m not looking forward to the break! Novels such as Tomorrow Will Come… can tend to be rather demanding. They want to be written. They want to dictate the workrate. It can be hard to resist. But sometimes it’s very important that you do.

If I return to work before the first of January 2009 you have my permission to call me nasty names and stuff.